Born and raised in Fort Lauderdale, Florida by musical parents, Stephen Evans naturally had the desire to perform music.  He began by making his friends watch him perform to records of his dad’s band, Four Saints. He progressed by playing the trumpet in various school bands, singing in the choir, and performing in musicals.

In his 20’s, Stephen was inspired by his brother, Scot Evans, who was the bassist/vocalist in the regionally successful band, Floating Men, from Nashville, TN.  So Stephen started his own rock band, Mean Season, in the late 80’s where he began honing his songwriting skills on the guitar.  After a few years of local success and radio play in Tallahassee, FL, the band moved to Atlanta, GA to increase their success.  Unfortunately, the band broke up, and left Stephen to try his hand at performing solo around Atlanta.

Soon the jammed highways of the big city drove him to the beautiful mountain town of Asheville, NC in 1996, where he quickly began soaking in the creative influence of his amazing surroundings.  After many years of vacillating between being a professional musician and being building a nest in Asheville, Stephen has focused on his love for creating and performing music.

In June of 2015, Stephen released his debut CD, “Something to Bleed”, with his band, the True Grits.  The record received local and national praise for its passion and creativity.  The band members are Brian Shoemaker (bass/electric guitar)  Sam Hess (drums) and Woodstock (mandolin), along with special guests:  Halli Anderson of River Whyless (violin/backing vocals), his brother, Scot Evans of Floating Men (bass on ‘1000 Roses), and his mother, Barbara Evans (backing vocals on ‘Sound’).

The latest EP release, “Under the Bridge” came out in 2017 to positive reception and local radio play as well.  The EP has 5 songs that range from rock to folk rock and describe an appreciation of Stephen's time in Asheville. Shawn Duxbury, Stephen's former bandmate in Mean Season, is a guest Grit performing lead acoustic guitar on the song 'Waiting'. The last track, 'A Rose for Emily', is a cover song written by Jeff Holmes & the Floating Men, and is based on the short story by William Faulkner of the same name.

Stephen’s strong melodic songwriting style is a blend of creative imagery of darkness and hopeful optimism.  There is no denying the passion that shines through with his powerful vocals and lyrics.  Songs like ‘The Garden’, ‘Cherokee Hills’, ‘1000 Roses’ and ‘Shining Star’ are beacons of his folk rock songcraft.  With some local radio play on WNCW 88.7, 103.7 WPVM, and 98.1 The River, and upcoming shows with the True Grits as well as solo shows spreading around the Southeast, be sure to check out what Stephen Evans wants to share with you. 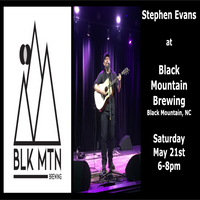 Stephen Evans returns to Black Mountain Brewing Co. in Black Mountain, NC for a solo show on Saturday, May 21st! Join him on the lovely patio for some original tunes and brew! 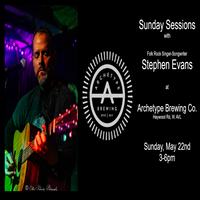 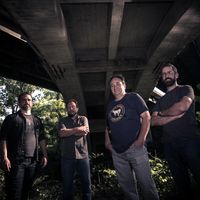