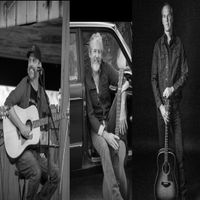 Come out and hear 3 of Asheville's premier songwriters.

Stephen Evans: Stephen’s strong melodic songwriting style is a blend of creative imagery of darkness and hopeful optimism. There is no denying the passion that shines through with powerful vocals and lyrics. Songs like ‘The Garden’, ‘Cherokee Hills’, ‘1000 Roses’ and ‘Shining Star’ are beacons of his folk rock songcraft. With local radio play on WNCW 88.7, 98.1 The River, and the local online radio station, Buzz Radio Asheville, as well as shows around the Carolina region, Stephen Evans & the True Grits are becoming a local favorite. A new record is on the way for December 2021 so they look to continue that trend. Tin Roof Echo: Asheville-based singer-songwriter Joe Hooten has been playing his style of folk music as Tin Roof Echo since 2014. Hooten has released seven albums of original music and is prepping his next album for summer 2022. Currently he's performing solo, with Asheville's all-star punk band PINKEYE, and with Black Mountain's legendary Dark City Kings. Scott Stetson: Born and raised in Rochester N.Y. Scott had an early start by playing in some of Rochester’s most popular clubs while still in High School. Scott has played in multiple Asheville, N.C. bands, including the Dirty Badgers and Cat & Crow. Scott enjoys the opportunity to share the stripped down, emotional side of just a voice and acoustic guitar. Crafting honest songs about love, life, murder, and broken hearts.